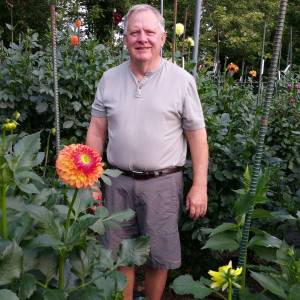 A grower of vegetables, fruits, and other plants for most of his life, Don Dramstad first undertook the labor of love that is dahlia growing in the 1990s. Despite the inherent difficulties of dahlia cultivation in the hot summers of the Washington, D.C., area, each year more and more of his acreage outside Leesburg, Virginia, is occupied with the striking blooms. Don has been president of the American Dahlia Society from November 2014 to present. He has also served as president and board member of the National Capital Dahlia Society for many years.